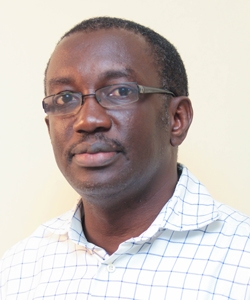 Prof. Sam Newton is an Associate Professor and Acting Dean of the School of Public health of the Kwame Nkrumah University of Science and Technology (KNUST) in Kumasi. He completed his medical education with a BSc in Human Biology and MBChB in Medicine and Surgery in 1993. After completing his housemanship at the Komfo Anokye Teaching Hospital, he joined the Kintampo Health Research Centre in June 1996 as a clinician. In 2000 he was awarded a fellowship by the Nestle Foundation to undertake an MSc in Public Health in Developing Countries at the London School of Hygiene and Tropical Medicine, University of London and completed in 2001.

In 2004 he was admitted to the London School of Hygiene and Tropical Medicine to do a PhD in Epidemiology and completed in 2007. He has carried out numerous field trials in malaria, iron and vitamin A as well as vaccine trials mainly in the area of polio, tetanus, hepatitis B and Haemophilus influenzae type b. He also has an interest in issues on Maternal and Child Health and has been involved in a number of field trials in that area. Prior to joining the University in 2012, he was a Clinical Research fellow at the Kintampo Health Research Centre conducting clinical and field based trials for the past 23 years. He has been a Principal investigator on a lot of field trials sponsored by the Bill and Melinda Gates Foundation, WHO often in collaboration with researchers at the London School of Hygiene and Tropical Medicine.